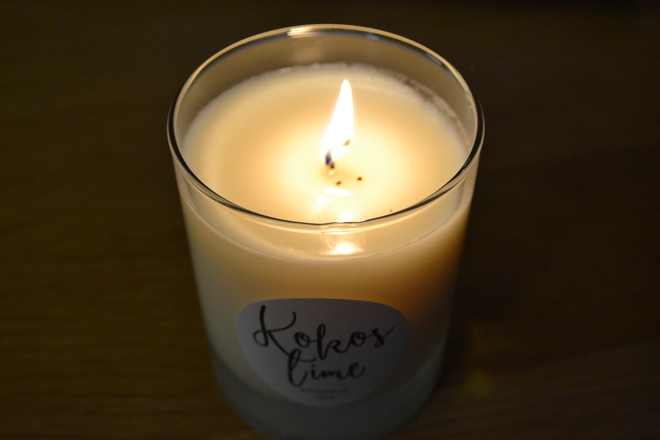 Candles are made from different kinds of wax and not all of them are vegan!

(Picture - Soybased with the scent Coconut & lime from Lagerhaus)

Soy wax - this is made from soybean oil and is supposed to have a very good throw.

Coconut wax - this is made from coconut oil and I believe this is the best one for the environment. It's a bit more expensive but on the other hand it can burn for a very long time, it's supposed to have a very good throw and the environment impact is not as bad as other options.

Carnauba or palm wax - this is made from the wax of the leaves from a palm. It's cheap and easy to produce but as you all probably already know, palm oil is really bad for the environment and have caused several animal spieces to go extinct. Vegan but not recommended.

Paraffin wax - this is probably the most common one and even if it's vegan I wouldn't recommend it. Both Swedish (Naturskyddsföreningen, 2016) and Norwegian (Folkehelseinstituttet, 2014) organisations have said that paraffin is a danger to health and the environment.

Stearin wax - this is supposed to be better for your health and the environment but it is not vegan. Stearin can be found in tropical plants but usually it comes from animal fats.

Beeswax - this is obviously not vegan since it's produced by bees. It's very common though and is often marketed as "natural" and "animal friendly" and words like that.

Tallow - this was widely used back in the days but I don't think it's used at all today. It's made from fats from cows, sheeps and goats and is not vegan.

WHERE TO FIND VEGAN CANDLES:

KOBO - all their candles are made from soy.

Mrs Meyer's Clean Day - all their candles are made from soy.

Voluspa - all their candles are made from coconut wax.

These are just a few and many stores that sells candles with animal products often have some vegan candles (for example IKEA, Lagerhaus).