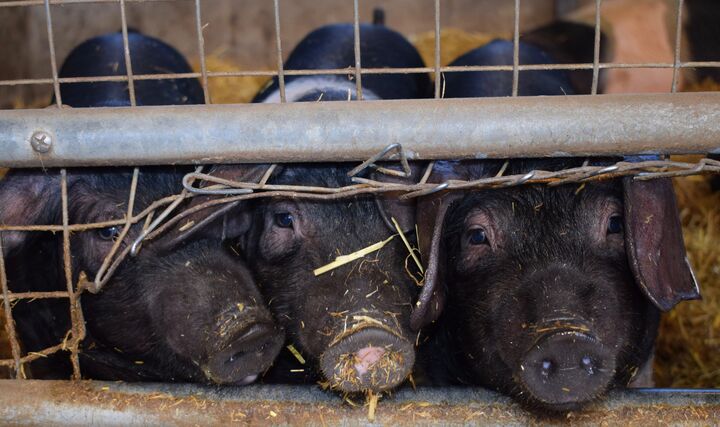 The average Swedish person eats about 644 chickens, 4 cows, 2 sheep, 27 pigs and thousands of fish during their lifetime.

From the Animal Welfare Act (Sweden): §2 "Animals must be treated well and protected from unnecessary suffering and disease." §4 "Animals must be kept and looked after in a good animal environment and in such a way that it promotes their health and allows them to behave naturally." It is now the county administrative board's responsibility to ensure compliance with the animal welfare law. In industrialized farming animals are considered things, not individuals with their own feelings and needs.

In Sweden there are approximately 1,500,000 cows, calves and bulls according to the Swedish Board of Agriculture (SBA). About 370,000 of them are dairy cows. 450 000 calves and bulls were slaughtered in 2007 according to the SBA. For a cow to produce milk, she must regularly feed a calf. The most common is that the calf is taken from the cow directly or at 24 hours after birth. The calf is not allowed to drink its mother's milk because the milk needs to go to the dairy industry. Cows and calves are stressed by the separation. It is not natural behavior to separate mothers and children and force them to live separately. The male animals are meat products and the female animals are milk and baby machines. A cow lives on average for 5 years in the dairy industry before being sent to slaughter. A cow can live up to 25 years in the "wild". You can not distinguish the milk and meat industry because 60% of the beef in Sweden comes from milk cows and their calves according to Swedish meat. Calves and bulls do not have the right to be outside. During the winter months most cows are bound up indoors where their only options are laying down or standing up. They can not even turn around.

In 2007, 3 000 000 pigs were slaughtered in Sweden according to SBA. The male pig is castrated a few days after birth and the law about anesthesia came in 2016. Before that no pigs recived anesthesia before being cut in the flesh. This procedure is made to affect the smell and taste of the meat and is very painful to the pig if done without anesthesia. The natural time for the weaning of piglets is about 4 months. In the animal factory, the piglets are weaned at 4 weeks. After 3 months, breeding becomes more intensive. Then the piglets are kept in boxes indoors in large stables with about 10 individuals in each. Congestion and competition at meals make the pigs stressed. This can lead to diarrhea, stomach ulcers and behavioral disorders. 99% of all pigs in Sweden will never be outdoors. In nature, they root, baths in mud and snack all the time. When the pig is 6 months, they are sent to slaughter. At the slaughterhouse they are hoisted into carbon dioxide to lose consciousness. According to research, carbon dioxide is stressful, causes anxiety and suffocation. The pig is slaughtered by cutting the throat and bleeding.

In 2008 there was about 6,000,000 egg-producing hens in Sweden. 40% of them are kept in cages. Up to 16 hens can be held in the same cage and each hen shall have access to an area corresponding to an A4 paper according to the regulations available, DFS 2004: 17. The hens that are not kept in cages usually live indoors in groups of thousands of animals. In a natural flock, there are rarely more than 20 individuals. In large groups there are serious problems with abnormal behaviors such as plucking. The hens are slaughtered at about 1.5 years when they are considered worned-out. They are often transported a long way to the slaughterhouses, or their stall are filled with carbon dioxide, which is very unpleasant for them.

According to the SBA, nearly 75,000,000 chickens were slaughtered in Sweden in 2007. The chickens never meet their mothers since they hatched in machines. They are often kept indoors in stalls that hold 10,000's of individuals. The chickens are growing too fast which causes them to have serious leg problems, among other injuries. Up to 24 chickens can be kept on each square meter according to the regulations available, DFS 2004: 17. The dirty surface causes severe burn injuries under the feet of several million chickens each year. They live about 35 days. Then they gather together, packed in cages and run to a slaughterhouse. Every year, about 150,000 chickens are injured and killed during transport in Sweden. At the slaughterhouse they are hung up in their feet, with full consciousness. Their heads are led through an electric water bath to make them stunned before the throat is cut and they bleed to death. Male chickens are thrown alive into a mincing machine when they are about 1 day old. They don't lay eggs and are therefore useless.

Even horses can count to the animals in the food industry, although many are kept for competitions and pets. Horses are not as common as pigs and chickens, but many horses are badly injured due to poor knowledge of their owners and many "unwanted" horses also end up transporting in Europe to markets and slaughterhouses.

These animals are not as common as pigs and chickens either. More specialized breeds and an intensive type of animal husbandry makes them profit here. For goats there are no official statistics but the number may be estimated at around 200.00 and the number of lambs to almost 250,000.

Much of this breeding occurs small-scale even if there is a large-scale operation in intense conditions. There are no official figures on how many ducks, geese and turkeys are bred and slaughtered in Sweden.

About 6 billion fish are killed every year in Swedish waters. Most fish are caught in the sea, but it is becoming more common with fish farms. Today we know that fish can experience pain and suffering. Nevertheless, they are treated as insensitive things. Most fish are killed by stiffening in the air, which of course is very painful. Capturing with hook, nets and trawls is also painful and stressful to the fish. Fishes raised in "crops" live tightly packaged. They are subjected to handling, transportation, labeling and a very painful carbon dioxide stunning. They are killed by cutting the throat and removing the intestines. The anesthetic method is ineffective, so this can happen with the full awareness of the fish.

This information is collected from from a booklet called "Vägen till Vegoland" (Road to Veggie land). It can be ordered from Djurens Rätt (Animal Rights), www.djurensratt.se. There is a lot of information and recipes that facilitate a transition to vegetarian diets.