Most common misconceptions about vegans

Which preconceptions do you most often meet as vegans?

I think the one I most often hear is that vegans can't get enough protein (which is complete bs). Last time I heard it was just some hours ago... My grandma was worried that I'm gonna get sick or something. Even though I'm happier, have more energy, my skin is healthier, my nails are stronger and my hair grows long and strong and thousands of other positive things now that I'm vegan. But on the "downside" (according to my grandma, I'm totally happy haha) I'm fatter

Other common misconceptions is that vegan food is just for rich people, that all vegans are skinny (lack of protein), that all vegans just sit around in the forests talking to deer all days (I mean, I would do that but the deer wouldn't by with me so

). It's a lot of misconceptions because people lack knowledge. Before I went vegan I thought vegans lived of soy and lettuce and never ever could have candy and ice cream.

"Vegan? Is that not very extreme?"

I do not know why people think it is. It is not extreme to choose a lifestyle that is better for the planet, the animals, the humans and yourself. What really is extreme is that people eat meat because "it tastes good" and "it is comfortable".

Otherwise, I have not heard any misconceptions myself, not what I can remember. But the protein thing is always a thing, even though it has not been central for me.

I guess this thing about vegans being militant is something I have heard... somewhere. And, as vendelay says, that vegans never eat sweet things, for example chocolate. And that you can bake vegan cakes. And that many things people already are eating, actually is vegan. I think most people have an image of it being difficult being vegan, they do not know what to cook. At first, my mother did not really know how to do things vegan, but now, one and a half year later, she says it is very easy to make food for a vegan. :)

Vegan Sidekick is always on point. Vegans are just that extreme 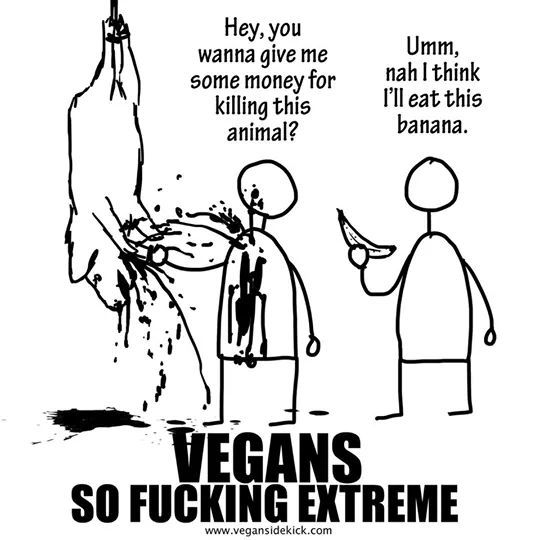 The first I ever heard of vegans was about the "militant vegans". They let out farm animals into the wild and the animals weren't equipped to handle that type of freedom, so they died. Others threw red paint at fur wearing people.

I understand why they did what they did, but I also understand why people thought that was extreme. Back then we knew nothing about vegans food habits. I think many of today's vegans still has to carry that extreme backpack even though they had nothing to do with those things in the past. That said I think the extreme vegans hurt the vegan movement more than they helped.

#4 I see your point. I definitely don't promote setting domestic animals free in the wild and I don't think anyone else here does either. Something that really bothers me is that people are put off by the thought of veganism because of something a few vegans did a long time ago instead of being put off by the thought of eating animal products when we know that those animals absolutely will be killed no matter what. Not to defend what those "extreme vegans" did but at least those animals had a (tiny) chance of surviving.

#5: Yes, I think it is important to show non vegans that veganism doesn't have to be extremism and that vegan food isn't missing anything and that it should be at least as good as any other food.

#5 I don't think that "vegans" who releases domestic animals into the wild really are vegans. It's not a vegan thing to do. The vegan thing to do would to take care of the animals, like the Swedish organization Tomma Burar (Empty Cages) does. Therefore I can't agree that vegans are extreme, ever. Because it's not "vegan" to let them out in the wild where they can't survive.

As said before, the protein problem seems to be a big problem for most who eat meat.  Vitamin B12 which is more or less impossible to get as a vegan, and a deficiency serious, I still have to hear about from a meat eater... And of course, all vegans only eat salad.

I've also heard that vegan food will make me weak... I still have to see it for myself, as a manual worker in the metal industry... after more than 15 years on vegetarian food.

I have to admit I'm old enough to have been inspired by those militant vegans when I was young, even though I wasn't vegan myself back then (still lacto-ovo-veg./) and never engaged in such activities myself. Still, I think most of it was done in ignorance. They didn't know what would actually happen. Not trying to defend their actions though.

One thing I heard yesterday was "but we need to milk the cows", like if we didn't milk them they would explode or get sick or something. I usually listen to the whole thing and when they're finally quiet I ask:

But why do cows produce milk?

Most people (not everyone...) then realize it's because of its calf, its baby. So the next question is:

Where does the calf go?

Most people I've talked to becomes very quiet here. I can't say that anyone of those have gone vegan but they all understand that it's wrong.

#9 "We need to milk the cows" and "the cows are okay with it" are lies that I've been told my whole life. I just have to quote Dan Piraro: "If you're eating or drinking something with cow's milk in it, it's because a calf chained somwehere isn't." Depending on wether the calf is a female or male, they meet different destinies. The females are raised to be like their mothers, milk machines. The males are either slaughtered shortly after birth or raised to be executed later in life. Honestly, I would not really call it life. What kind of life is it when the day of your execution are planned when you are born? What kind of life is it when you are born into hell and the only way to escape is death?

Speaking of milk, something I've heard a lot in books and movies growing up is that the cow only gives milk if she is "satisfied" with the way you milk her. Like in a sexual way I think. Have anyone else heard that? I don't remember where I read / heard it.

Pardon? I haven't heard about it. To me, it sounds like a way to justify raping.

I'll try to see if I can find it sometime, maybe I got it wrong.